To the Church – route

To the Church – route

To the Church – route is a cultural tourism route based on the book of Kirkolle by Volter Kilpi, which has been implemented with Leader funding, with the help of the Isoluoto Village Council, the Volter Kilpi Society, the Kustavi Parish and the Kustavi Library-Culture Committee. The above implementation took place in 1999. Most of the signs for the route are missing. An overhaul of the route is planned.

To the Church – route’s items and texts are borrowed directly from the brochure: (Some of the items are in the courtyard to which access is prohibited) 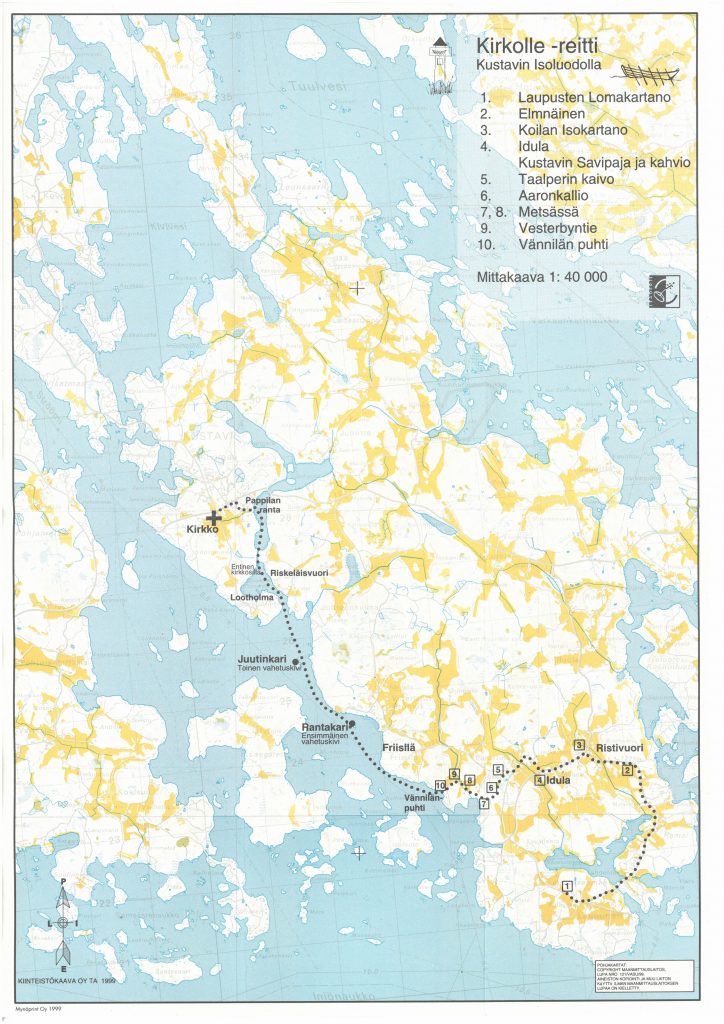 1.Laupuste Holiday Manor (private courtyard)
Laupuste Holiday Manor, which has a memorial stone erected by the Volter Kilpi Society inside the gate. Laupunen, called Langholma in the book, was the childhood home of Kilpi’s mother. The author’s parents moved there after they got married. The farm consisted of three houses, Simula, Pietilä and Krookla.

Volter Adalbert Ericsson, later Kilpi, was born in Pietilä’s house on December 12, 1874, according to an entry in the family book. Slightly next to the fence you can still see the stone foot of the house and the basement door. A century ago, the scenery has been very different. Due to land uplift and straining of straits, former waterways have been lost and roads have been built in place or bends have been straightened.
The Strait of Laupuste used to separate the lands of Laupuste and Ramsi from each other and the main island, but is now a gutted bay. There are plenty of shorebirds in the area and several species of garden birds nest there.

2. Elmnäinen (Lahdenperä)
Currently uninhabited house on the left side of the road. The church was first set off from Lahdenperä, with a stocky jugper in front, followed by the little boys Vihtori and Artturi with shiny caps. The road no longer runs right through Markonmäki but has been straightened to Koila Market Square. We can no longer walk between Isotalo (now Heikintalo) and Vähätalo (now Päivölä e Antintalo) (House burned down in 2019).

3.Koila’s Great Mansion
In the foreground is Matintalo, also know as Toistalo in the book, which was bought by Kilpi’s parents. The family moved there when Volter was eight years old. The captain of Toistalo and his families and service departed from here. The road turns left and has been straightened a couple of times. After half a mile, the next destination is on the left.

4.Idula Farm, Pukkila Archipelago Series
At the time of writing, the road has passed between the Idula buildings and the intersection across the current field to Alakylä. Now the road turns right to the current Kustavi Savipaja and across the yard, through the forest to Pyölintie. The Savipaja store building has been the house of Captain Nyholm, where Kilpi, like his brother and others, received home tuition.

5.Taalperi well
Pöylintie is reached by Viherlahdentie, in front of the trees behind Tukkila windmill. According to the book, the former caretaker, Juuvann’s grandfather, had handed over the house to his son and lived on the culprit. The track is to the right and the point is in front of us, signpost 5, the former Taalperi well and the path takes you through the forest.

6.Aaronkallio
Aaronkallio is one of the former dance rocks. In the book it is Pietarikallio, which is traversed, first to the left then to the right along a forest road, to the bridge and over a ditch along forest paths, field edges and built bridges following signs (7, 8) to the road and to the right.

9.West Village
We come to the former Vesterbyntie intersection of Länsikyläntie, from where we turn left. To the left is a rock, which in the book is called Copper Mountain.

10.Vännilänpuhti
Here, Juuvanni’s grandfather was in a hurry to equip the boat before the others arrived. From here, the boat called Kihlakunta left for the church on the Midsummer morning as described by Kilpi:

“Three to three hundred people were sitting in the boat now …”

In the Strait of Oura, the Swedes from Lypertö and the Russians from Iniö had violently clashed during the Finnish War. The bodies of those who fell in the naval battle have been buried in Vännilä’s ravines. And it is said that the warlord, having sunk his ship, had cast his golden curved saber into the water before his death. Even Sapelia Toistalo Albert, clinging to the edge of the boat, tried to see. It was also reported that the beach was haunted. The warlord walked on the bridge and looked at where he had thrown his saber and where his ship had sunk. Cannonballs have been found in Friisilä’s fields for the next few years.

Rantakari
Rowing along Ström. The rowing trip was difficult and sometimes rowers were changed, for the first time after the Friisilä peninsula, apparently in Rantakari. And the second exchange was at the beak of the peninsula of Juutinkari, opposite the Hindespendal. According to the story, Bishop Henry ascended the land on these mains and went with his entourage through the valley to Mount Henry.

Lootholma
At the Lootholma peninsula, we turned to inland waters. At the top of the headland is still the yellow Lootholma house. Kustavin Matkailu Oy currently owns the area. To the right rises steeply the Riskeläisvuori, or Ristivuori as in the book, from which we turned to Kirkkosilta and from there through the woods to the church, whose stairwells shone like green. There are only a few cliffs left of the church bridge.

Pappilanranta
Now we paddle through the reedbed of Emmanrauma to Flara and Pappilanranta and walk down the road to the church. The southern end of the church of Kustavi (from 1783) was transported through a gate in the stone wall to the church grounds. “..here sleeps in the manor of God all who are gone and the head is revealed when they and their own soul are blessed ..” There also rests Volter Kilpi (d. 13.6.1939), his brother, his parents and his ancestors.