The nature of the archipelago

The nature of the archipelago 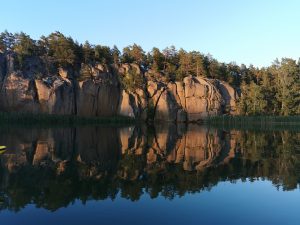 In a few places we have millions of years old bedrock as well represented as in the archipelago. The alternation of surface and deep rock types and the different ways in which rock types are created create diversity in the bedrock and give the landscape its own color. The formation of landforms has also been influenced by the continental ice age, which has consumed and displaced materials. Due to the rise of the land and the fluctuations of the sea level, there is little material that is suitable as a growing medium for plants.

There are well over a hundred species of birds nesting in the archipelago sea. The Archipelago Sea is an important breeding area for Finnish birds and a resting place during migration. The majority of the fisheries in our coastal area are made up of typical inland species such as pike, perch, bream and many other roach fish. Snakes are common in the rugged rocks of the archipelago and their color forms can cause headaches when recognized. Kyy and the beach snake are a common sight on the rocky shores of the archipelago and in the woods.

In the archipelago, deciduous trees often form the border of the forest. The different parts of the islands can be very different. There are many species of plants, mammals, birds and insects in the Archipelago Sea that are endangered elsewhere in Finland or that are completely absent from the nature of mainland Finland. Even on the islands of Kustavi, rare plant species have come along with the cargo of ships and are still in full force.

The sea eagle (Haliaeetus albicilla) is a day bird of prey belonging to the hawk tribe. The sea eagle is the largest bird in Finland in terms of wingspan. The bird’s head and tail are lighter than the rest of the feather cover, the tail lightens as the bird ages and is eventually completely white.

The archipelago is home to a wide variety of mammals such as deer and elk. There are also plenty of small beasts, and larger beasts are regularly observed for lynx and occasional wolves. The majority of mammals are skilled swimmers, so water bodies are not a barrier to passage.